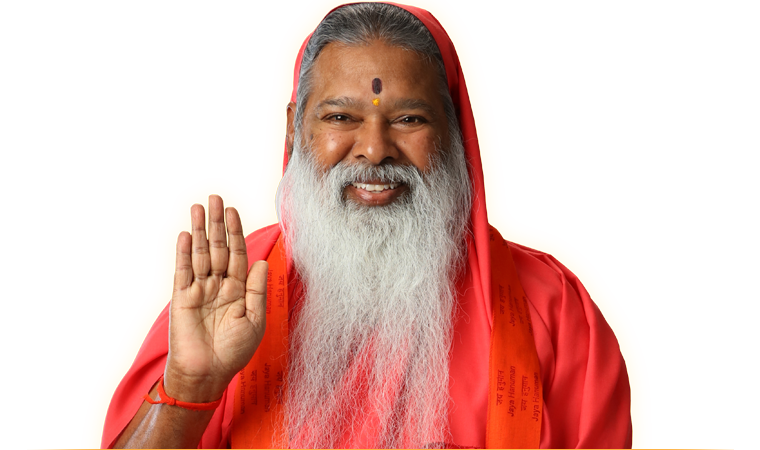 His Holiness Parama Pujya Sri Sri Ganapathy Sachchidananda Swamiji, the Pontiff of Avadhoota Datta Peetha in Mysore, India was born at Mekedatu in southern India on May 26, 1942. A Muslim saint had predicted to His parents (Sri Narasimha Sastri and Jayalakshmi Mata) that their child would have supreme wisdom and knowledge and was destined to uplift mankind.
Pujya Swamiji’s actual birth occurred on a rock in the Kaveri river. His mother Jayalakshmi Mata was in deep meditation and the child was born covered with holy ash. The child was named Satyanarayana. His mother, whom the Sri. Swamiji calls His first Guru, initiated Him into spiritual life before her passing in 1951. Satyanarayana completed His education like other children but found the school had nothing to offer Him. He was endowed at birth with great knowledge and power. Even as a child, he organized satsangs and taught bhajans to His friends, and performed “siddhis” to entertain them, such as turning tree leaves into sweets.
He had been serving his fellow humans, helping them with their problems since his childhood. Through his miraculous powers, He was able to understand their situations, knowing their past, present, and future and helped them to overcome difficulties. Some of them became his first disciples who were soon to be followed by more. He sang bhajans and kirtans for them and started giving yoga classes in small village huts or on river banks, while he was wandering the countryside as a monk. He acquired a large following, which demanded all of His time attention.
In 1966 He moved to the present site of the Mysore Ashram, which in the early days was only a straw hut in a field. It was there at Mysore that He became Sri Ganapathy Sachchidananda Swamiji. Since then Sri. Swamiji has been helping people in His unique way. People come to Him for help with their worldly affairs, or to become healed of physical afflictions, or for guidance in their spiritual practice. Many come to hear His beautiful and powerful songs, which draw the heart and mind to God or to celebrate the special festivals in the ancient and eternal Vedic traditions.
One of the important festivities is Maha Shivaratri when Sri Swamiji entered the homa Kunda unmindful of the surrounding fire. A memorable part of Shivaratri is Sri Swamiji’s Agni Puja, the worship of the Fire God, which He has inherited from his ancestors and has been performing for many years. Sri Swamiji does Puja to the Agni standing in the pit (Homa Kunda) unmindful of the leaping flames which surround Him. After worshipping Agni, He materializes Shiva Lingams, Sri Chakras, and other items. It is a case of spiritual fire conquering material fire, and it benefits the whole world.

May the choicest blessings of Lord Dattatreya be on you. Jai Guru Datta